Football, Tactics & Glory it’ a particular videogame. We had appreciated it two years ago in Our review thanks to his dynamics of gameplay. It’s a mix of Turn-Based Games and RPG’s elements in a football game.

This game was grown in this long time thanks to continuous updates of Creoteam – a little indie Ukrainian team who create and support the game – and the unbelievable support of a passionate community. A community offers tons of customable content with rich details.

The last recently dlc released DLC, Football Stars, updated and expand the game and offer deeper gameplay for menage the club. So we had contacted the authors. We spoke with Andrii Kostiushko, Creative Director of the game to know beyond the scene of one of most original strategic and RPG games of Football. We wanted to know more of the past, present, and future of Football, Tactics & Glory. Possible evolutions of the game? A New Expansion? A sequel? Other news?

So, here the interview with Kostiushko. It was a nice interview, rich of details and stories. Here the Italian version for Our Italian friends.

Enjoy the Interview. Thank You for reading.

(Thanks to the translation of the Q&A at Danny DSC and Dino C.)

“Ritual question”: introduce yourself to the Italian public

I’m Andrii Kostiushko, Creative director of Creoteam. My main responsibility is to design the game in such a way that it’s very interesting. But aside from game-design, I manage the team: make plans, create tasks, control some boring stuff like money, agreements etc.

Explain the origin of your team

Our team was formed in 2005 by several professionals who previously worked on the Sherlock Holmes series and other games in Frogwares. They had the ambition to create a great hack-n-slash shooter the events of which happen in post-apocalyptic Kyiv. As a result, in 2008 the team released Collapse.
It was released in CIS countries on PC. Later, the publisher released the game by the name After the War in Italy and Spain.

In 2008, the world economical crisis happened and our publisher decided to not continue the Collapse series. We tried to revive the series, released the addon, searched for the console publisher (even found one, but he later closed the project) etc. But it was a time when the medium-sized team were closing because they couldn’t survive. Steam still wasn’t as open as it is now, getting to consoles was hard. So our team decreased from around 20 people to 3 core members: me, Technical Director (author of our engine) and Animation Lead (the main person behind all our great animations both in Collapse and Football, Tactics & Glory).

In 2011, we decided to make the game in developing which every one of us is great: I could make the great gameplay (and I wished for a long time to create FTG), Technical Director would continue improving our engine, Animation Lead would make smooth and beautiful animations.

Where the idea of Football, Tactics & Glory project come from?

I talk about it in details in this video:

But in short, I played football management games from late 90th. And while I loved this genre, there were things which I didn’t like. These things are: not obvious match results, a lot of routines, a lot of numbers and spreadsheets which seem to no affect anything etc. I knew that I want to solve all these problems, but I didn’t know how to do that.

In 2011, Creoteam already had problems and almost all people left the company. But coincidentally, I just finished playing Persona 3, and the idea sparkled in my mind that I can use the core mechanics of Persona 3 to make such matches which are interesting to play and allow to manage footballers without a lot of hassle. Around month with just pen and paper I tried to find the scheme of how to use the Persona 3’s mechanics in the football game. And at the time, when there are only three persons left in Creoteam, I already had quite a good vision in my mind.

Which games have inspired you?

Persona 3 – in the first place. But to be frank, in the final FTG there’s nothing very close to that game. I loved FIFA Manager (which used to be called Total Club Manager). I think that I was inspired by it partially as well.

Also, I’d say that the Civilization and XCom series made some inspiration. Nothing, in particular, is taken from any of these games, but you can find similarities. For example, civics in CIV5 are quite similar in gameplay to the specialization tree in FTG 😀

The gameplay has grown over the years. How will it evolve in the future?

So FTG can become more realistic, there will be more details but anyway we will continue to be a grand strategy in the world of football. We will concentrate on the top-level decisions in the management, and interesting match mechanics in the match day. Our goal is to keep the game simple enough to start playing but very deep and replayable.

What do you think is the strongest feature of the game?

The game became so great not because of one strong feature but because we managed to smartly combine the turn-based mechanic, the simplicity and depth of the footballers’ levelling mechanics, the simplicity of the interfaces.

The game wouldn’t work without any of these elements. For example, when we initially designed the turn-based mechanics, we took to account the levelling system.

Because it affect which numbers are used for different actions, what is the distribution of the attributes, how the game will be played in either the lower or higher league. So the game as a whole is our strongest feature 😉

What do you think you need to improve?

We think that players need more “rest” between matches. Therefore, if we ever start making FTG 2, there will be more managing mechanics which will break the cycle of match-match-match-…

But we are going to move steadily so new mechanics do not break the game.

A great value is the mods support. Is there some amateur work that impressed you more than others?

There are several ways the players impress me with their mods. On of the kind of mods which impressed me are those where players created the real faces of real footballers:

Another interesting type of mods is fantasy worlds. For example, here’s a mod by Captain Tsubasa universe: https://steamcommunity.com/sharedfiles/filedetails/?id=1353865156&searchtext= Or if we talk about a bigger set of mods, there are mods which cover fictional universes for every country so you can play in a unique world where mystical cities compete wich other: https://steamcommunity.com/app/375530/appreportedcontent/?steamid=76561198072614707 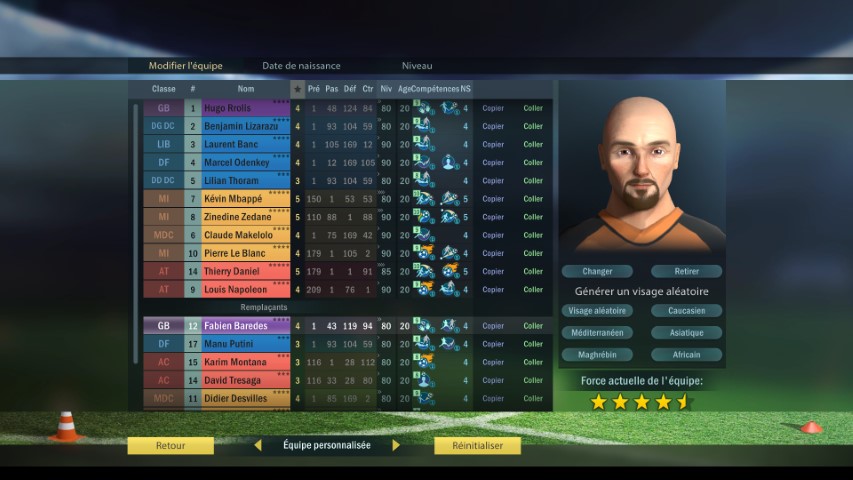 The first Football Stars dlc reinvigorated the game by adding new great features. Which is the most decisive in your opinion?

We develop new mechanics to FTG by some bigger plan. Usually, if you see a big new mechanics, it was planned and designed at least one year before implementing or even more. So two new huge improvements: Statistics and Giftedness were planned long ago but only with this DLC we were able to implement them. I like both of these mechanics but Giftedness more affects the gameplay, and Statistics more affect the feeling of the game world. Also, while it doesn’t sound like a big mechanics, but we spent a lot of time improving the way AI performs substitutions and prepares its formation.

Btw, initially, we thought that we would implement Giftendess even later. For this DLC, we wanted to implement the possibility to change the clubs by a coach. But it appeared that we can’t do that in the expected timeframe, so we changed our plans. And as it appeared – for the better.

Over the years you have also improved the graphic quality. What else can we expect?

We believe that graphics is very important. An additional important aspect which is related to the graphics is modding. We always wanted the world to be filled with really different footballers. Not just clones which are formed from 10-20-30 faces with different haircuts and colors. We really strive for the as bigger variety as possible.
That was the reason behind our great Face Editor. But we want to achieve even more realism in everything: in faces, in the match, in the stadiums. So if we continue developing FTG, expect it to be more visually realistic in future.

Will you develop further expansions in the future?

Currently, we are debating inside the team what to do next. We can start developing FTG 2 because we want to rewrite our engine. We can continue improving Football Tactics & Glory 1 on the current engine by adding new DLCs. Or we can start making a totally new game.

Or are you thinking of a sequel?

Can’t say for now. Subscribe to our new channels to know first when we announce the news.

In a hypothetical sequel, what would you add?

We are not sure if or when we might start working on a sequel. But we inside the team we all know what it will be if we decide to work on it. There will be significantly more realistic graphics, new match engine (it will be tactical and turn-based but with more realistic approach), some new activities out of the match.

Thanks for your time!

Thanks to you. Wish your site and your readers to have fun playing games!
Cheers,
Andrey