After introducing us to the gloomy, Victorian, and decidedly interesting setting of Alder’s Blood, the small Polish videogame dev studio of  Shockwork Games introduces us to its new game: Nadir.

It is a turn-based strategy with jrpg shades (from a Japanese role-playing game, just like the older Final Fantasy games, ed), and deck builder. All in a completely new context and, from what little we have already seen, with a peculiar aspect. Completely different from that of the previous work, however, to confirm an unconventional and first-rate artistic vein.

Intrigued by this new project, which will then take us to the city of Nadir, overlooking the rings of Dante’s hell, we spoke to Michał Bernat, CEO and lead designer of Shockwork Games. The result was an interesting chat from which Bernat’s passion and love for his creatures (Alder’s Blood and Nadir) exudes. We crossed the (recent) past, the present, and the future trying to know a little more about Naidr that will arrive between the end of the year and the beginning of the new year.

But without going any further, we invite you to read our interview (here the Italian version) and wish you a good read.

Hi guys, let’s start with a customary question: introduce yourself and Your team to the Italian audience.

Hello! We are Shockwork Games, indie developers from Poland. You may know us from Alder’s Blood, a tactical stealth game that we released earlier this year.

Do you think it is harder to be an indie developer now or has it been in the past?

Definitely the point of the entrance has been dramatically lowered with all the tools available. Pretty much anyone can make a game now which increases the competition. These days indie devs need to be more businessmen than ever before. Thinking of your game more as a product will save a lot of disappointment later. 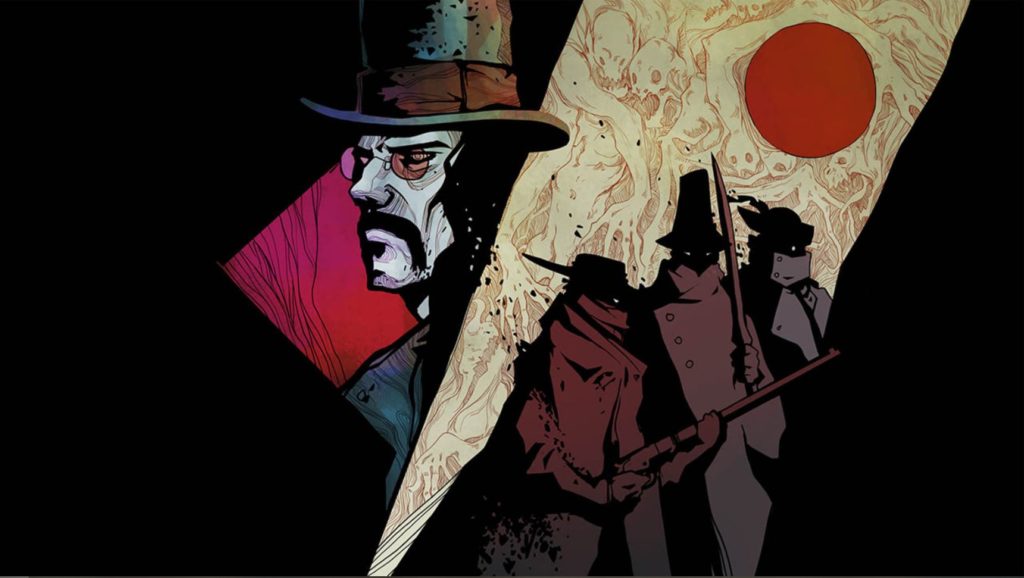 Did you develop Alder’s Blood, what experience was that?

Yes, that was us. It was definitely THE experience, all good and bad. We learned a lot, but a big part of that tought us how to NOT make something in the future. It was definitely a huge learning experience for the team which allows us to work faster and more efficiently right now.

To me (Mike) it’s more regrets about not doing things in a different way. For example, we had a lot of problems with graphics which could easily be solved if we decided on pixel art, but well, lessons learned. However, I can tell you that there is this huge boost to morale when you finally see your game in the storefront. That’s just epic!

What is the strong and weak point of Alder’s Blood in your opinion?

The strongest point to me is its setting. I believe in it so much that we are still developing it in different formats. The weakest part is its size, or what came with that. The game was simply too big to comfortably manage it with the team we had, so a lot of problems we are solving now may never be there in the first place. 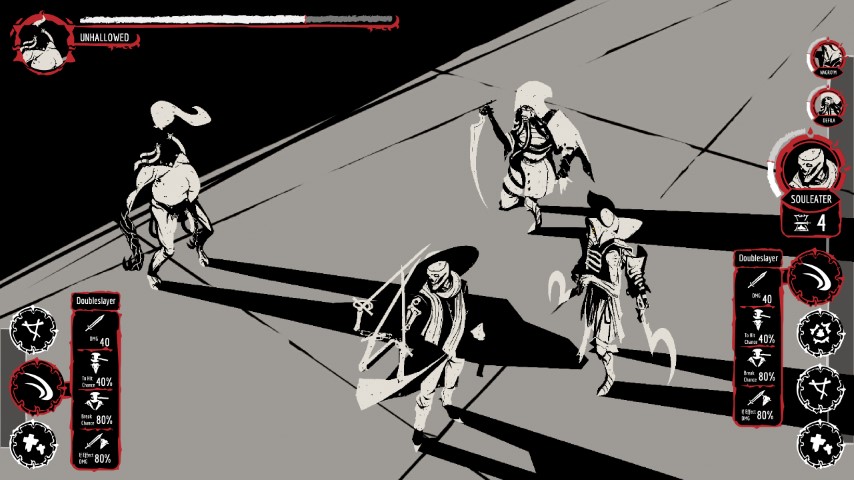 Your new game is called Nadir, can you tell us why you called it that?

We wanted to create a new IP, something as inspiring as the world of Alder’s Blood, but, different. We were looking at different references, and in the end, stayed with Divine Comedy. So we have this city that pretty much is Hell, and nadir means the opposite of zenith, so something below, deep under. We needed a name for our city and we came up with Nadir.

What kind of game will it be?

It’s a mix of jRPG combat and roguelike RPGs like Darkest Dungeon, or card, deckbuilding games, it has this kind of feel to it. So it’s turned-based but with a bit of a twist to its turn system. You fight single, very powerful enemies, one at a time, with a group of 3 antiheroes. You try to reach the bottom floor of the city of Nadir. On each level, there is a boss that you need to defeat.

And these guys will be so powerful that they will have separate Healthbars for every body part. To summarise, we are aiming at stylish, fast, combat with lots of synergies between characters, but simple enough to not get lost in millions of keywords.

What differences will there be compared to Alder’s Blood?

Pretty much everything is different. The only similarity is that both games are turn-based. While AB was all about stealth, here it’s all combat-oriented. There is no subtlety to it, just go and kill some damned souls.

Nadir also seems to have a particular artistic style. Bet a lot on this for your productions. Please, let me know Your inspirations sources for Your games.

They were changing along the way, as we were trying different styles. So right now it’s a mixture of comic book artists like Mike Mignola, Sergio Toppi, and Tsutomu Nihei, and more classical depictions of hell in the form of woodcuts. There’s some Giger thrown there for some good measure as well.

What will the story and setting focus on and what will they be inspired by?

It’s all loosely based on Divine Comedy by Dante Alighieri, but mostly it’s “setting”, not the story itself. We will be playing the avatars of Sins residing in the void surrounding the City of Nadir. It’s a pretty grim setting, with lots of damned souls filling each floor of the city (rings of Hell from Divine Comedy).

What kind of characters (and playable classes) will we have?

Right now we are working on characters that represent each of the Cardinal Sins, so we have plans of 8. Yes, 8, back in the day they had one more. Each of these will have its own features, like reliance on attack, or defense, comboing with different status effects, etc. Right now we have 3 avatars working:

Wrath: sacrificing his own health to build up combos. It’s a risk-taking type of character.

Pride: Relying more on the effects that others inflict to build up his own combos.

Lust: she’s most likely be a more complicated character working on all kinds of the special effects we have in the game. 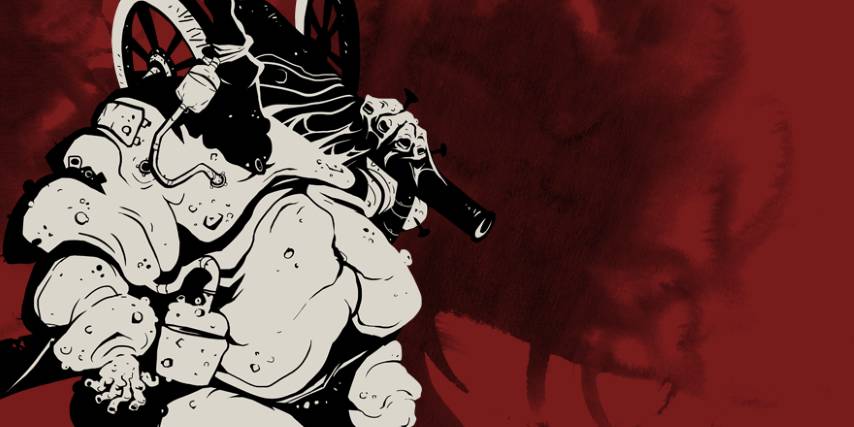 Tell us about the gameplay (Battle mechanics, dynamics, tactical covers, and more) what new features are you offering?

The Threat Counter is our twist on the turn system. Instead of Action Points, you have this Counter, each skill cost some points from that Counter. When it reaches zero, the enemy turn starts. You will have to balance out your characters skills, so that you will the right abilities at the time. You should also try to delay the enemy turn to build a better combo. Some abilities can add some points to the threat Counter allowing you to prolong your turn.

Enemies will telegraph their attacks, so you will know who will be attacked and by what type of attack, so you can prepare accordingly.

A question that may seem unusual but we ask you anyway: who will make the soundtrack?

I’m not sure yet. We have some contacts from Alder’s Blood times, but we haven’t decided on anybody yet.

What kind of soundtrack can we expect?

Definitely something strong. What exactly? I’ll leave it to people who actually know something about the subject. But I want something epic for sure.

Will you turn to crowdfunding to help game development as Alder’s Blood?

We are looking at these options, yes. Alder’s Blood was a successful Kickstarter campaign, so it would be easier this time around. We definitely would like to make as much as possible while still being independent with it. 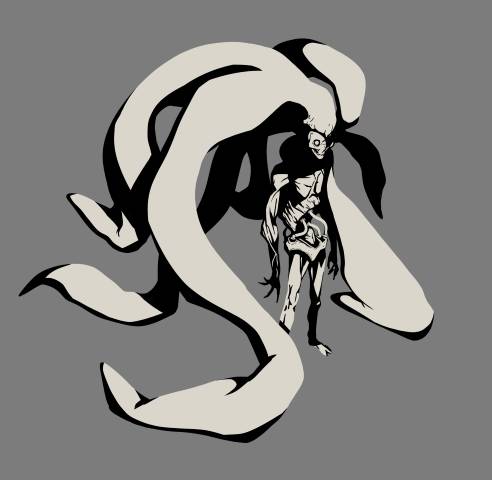 When is Nadir expected to be released and for which platforms?

Late 2020/start of 2021, we are considering Early Access for Nadir. We want to release it on all major platforms, but the main focus will be PS and Switch.

Are you thinking of a PS5 and Xbox Series X version?

Why not? We’ll see how support for indies will look on new consoles, how much devkits will cost etc. It’s a bit too early for that.